1). From a solar power standpoint, why would Atlanta and Georgia be a great market for PV2EV?

Anyone who has spent a summer day outside knows that Georgia is a warm and sunny place. Georgia averages over 2,900 sunny hours each year, and over 100 clear days.  The potential for solar energy use in Georgia is dependent upon the amount of sun shining on the earth’s surface —called “solar insolation”. Insolation values are expressed in kWh/m² per day, or the amount of solar energy measured in kilowatt-hours striking a square meter of the earth’s surface.

Additionally, anyone who has spent rush hour in Atlanta’s horrible traffic (ranked 7th worst in the nation in 2011 by the Texas A&M Transportation Institute) has seen a first-hand account of how congested our interstate system is and how much smog and carbon we are emitting into the air.

Solar powered electric vehicles (PV2EV) take advantage of Georgia’s awesome solar resource and provide a solution to our smog levels caused by transportation congestion. Every EV that hits the road creates a level of clean air, and solar powered EVs use clean, unlimited sunshine as a fuel source (how’s that for a Clean Air Campaign).

2). What are the economic and environmental benefits of PV2EV?

From an economic standpoint, PV2EV presents a situation to realize tremendous financial savings. Ask yourself this, “How much money do I spent on gasoline each month?” If you are like me and have a roundtrip commute of 70 miles each work day, you are driving 1,500+ miles each month and spending in excess of $150 dollars on gasoline. If you are a stay-at-home mom or dad who runs errands during the day in a gas-guzzling SUV, chances are you could be spending more than $300 dollars per month on gasoline.

PV2EV allows a driver to use sunlight collected by solar panels as a fuel source, with the added convenience of the fueling station being brought into your garage electrical outlet. By recharging an EV each day with power generated by a solar energy system, you are, in fact, producing your own transportation fuel. Since you are no longer using gasoline to drive around, every mile that is driven in a solar powered car is a trip in which you are saving money.

Here’s an analogy to put this into perspective: Imagine someone came to your door and offered you a credit card which could be redeemed at the gas station which would allow you to pay just $1 dollar per gallon of gasoline purchased for the rest of your life. You would be really interested, right?

The same is true with a home solar energy system – Solar panels are used to generate the necessary power for an electric car.  By installing a solar power system on your home you are essentially locking yourself into a set cost of power. If the price of power increases over time, and it will, you are immune to the price increases because you produce your own power thanks to the solar panels.

A number of environmental benefits relate to PV2EV as well. First, we are eliminating the carbon emissions associated with burning gasoline in an internal combustion engine.

In a non-PV2EV scenario, the carbon emissions associated with recharging an EV are a function of how dirty (or clean) is the power that is generated by the utility. Burning fossil fuels to make power, like coal-fired power generation for example, is one of the dirtiest forms of power generation. EIA estimates 2.08-2.18 lbs of CO2 are produced per kWh generated by coal. Because of this, the U.S. EPA recently announced regulations designed to encourage less power generation from coal (read more about that on our blog).

In a PV2EV scenario we are using the sun as a power source. There are no carbon emissions associated with harnessing clean, unlimited solar energy, so environmental benefits thanks to PV2EV driving are a double bonus – No emissions from burning gasoline or from burning fossil fuels.

3). What factors support PV2EV and what needs to be overcome to really drive installations?

One of the biggest misinterpretations about solar energy is that it is too expensive. In fact, going solar is actually a really smart financial decision. Ask yourself, “How much did I spend on power over the past 10 years?” My thought is that the cost of NOT going solar is a lot more expensive.  And when you factor in the savings from powering an EV with solar and no longer paying for gasoline (see above example) the savings is even greater.

Additionally, the cost of solar panels has decreased tremendously in the past few years. According to PV Magazine, solar PV system prices have fallen by 50% compared to 2010 prices. This is directly related to demand as more and more homeowners are going solar. In 2013, for example, a new solar energy project was installed in the U.S. every 4 minutes. Solar power in America now exceeds 14.8 GW (gigawatts), or enough to power more than 3 million homes.

There is also a misconception that an EV cannot support an average person’s driving habits. According to U.S. Department of Transportation, Bureau of Transportation Statistics from 2014, 85% of American drivers commute less than 26 miles to work one way.

According to the Clean Air Campaign, in 2012 the average commute distance in metro Atlanta was 35 miles. So, in Georgia we travel a little bit further than the average American commuter, but it is still within the range of a Nissan Leaf. And a recent human resource news report found that offering on-site EV charging is a new trend being offered by HR departments, so there isn’t much cause for major range anxiety concerns.

4). What about home charging for EVs and Solar Power? Can I use my solar panels to power my home charging unit?  Does it help with payback? 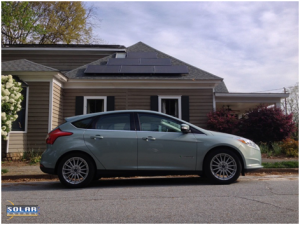 Yes, you can certainly use solar panels to power your home charging unit (we’ve already touched on this in an above answer). Solar Energy USA is available to design a solar power system to generate the equivalent amount of kWh to meet the daily or monthly needs of Georgia EV drivers. We have a number of solar powered EV customers whose installations can be viewed on the Residential Solar Case Studies page of our website. I encourage current and future EVdrivers to reach out to us to learn more about our line of Affordable Solar Solutions.

I am an "EVangelist" who wants you to experience the joys of driving and owning electric vehicles. I currently own a 2015 Tesla Model S 60, and have owned/leased a 2015 Nissan LEAF and 2013 and 2014 Chevrolet VOLTs. I maintain two Wordpress blogs: an EV information focused blog (AtlantaEVDC.com) and an EV Rental blog (gaeventures.com) and Facebook page (facebook.com/gaeventures) and three Twitter Sites: @JBCMKTR (personal), @AtlantaEV and @GAEVentures and JBCMKTR on Instagram.