This past August 2017 marked the 5th Anniversary of my transition from “gas to electric” driving, logging about 70,000 miles in either all electric (Nissan LEAF, Tesla Model S) or Plug-In Hybrid Electric (Chevrolet VOLT) vehicles.  In thinking about my life experience as an EV driver, I wanted to share my perspective as the US EV market cracks the 1% mark and the 99% Reality of why I believe that EVs can be the ‘go to’ vehicle for the vast majority of driving circumstances.  [photo: 2013 VOLT on delivery day 8-16-2012]. END_OF_DOCUMENT_TOKEN_TO_BE_REPLACED

EV Charging Comes to Atlanta Airport and in a BIG way!

What started out as a conversation between Georgia Public Service Comissioner Timothy G. Echols, City of Atlanta Mayor Kasim Reed and his Director of Sustainability Stephanie Stuckey Benfield (recently promoted to Chief Resiliency Officer) has advanced to the first phase of three phases of electric vehicle charging stations at Atlanta’s Hartsfield Jackson International Airport. The first 102 charging ports were officially unveiled on Thursday January 12, 2017.  And that was very welcome news to metro Atlanta EV drivers.

How did this finally happen?  Read on about the individuals who led the charge to make electric vehicle charging at Hartsfield-Jackson International Airport happen. 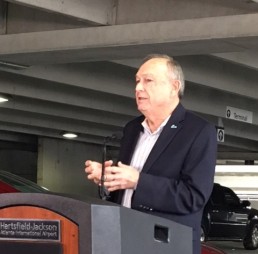 Don Francis, Executive Director Clean Cities Georgia.  Don has been championing charging at the Atlanta airport for at least five years and has been actively part of the planning process that has brought the first phase of chargers. Don’s widespread network of government, industry and think tank partners along with his deep knowledge of EVs and EV charging drives his quest to ensure that the state of Georgia continues to support the growth of electric vehicles and reduces our dependence on foreign oil. Don has overseen charging station infrastructure in Georgia for over 20 years, going back to the GM EV1 project. 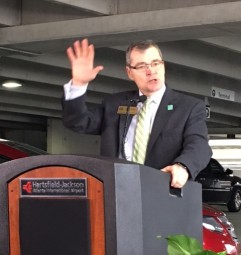 Tim Echols, Commissioner, Georgia Public Service Commmission. Tim has been the most vocal publicly elected official supporting electric vehicles and charging stations for years. Tim took a position during the 2015 Georgia General Assembly to retain a modified ZEV/LEV vehicle tax credit to continue to support clean energy and to improve Georgia’s air quality. Guest Post by Tim Echols, Commissioner, Georgia Public Service Commission: Why Retain the ZEV/LEV Income Tax Credit In Georgia?As a tireless champion, Tim does not give up easily.  It was Tim’s conversation with Mayor Reed and Ms.Benfield that sparked the commitment on the part of Mayor Reed to aggressively ‘close the EV charging gap’ at Hartsfield Jackson International Airport.  Tim builds bridges ‘across the aisle’ as demonstated by his re-election to the Georgia Public Service Commission this past November, garnering the largest number of votes of any elected official in the history of the State of Georgia. 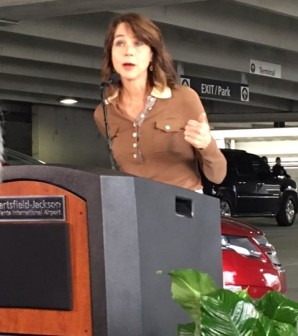 Stephanie Stuckey Benfield joined the Mayor’s Office as Director of Sustainability in mid-2015 and immediately began to make her mark on alternative fuel vehicles. The City’s fleet began to transition from ‘gas guzzlers’ to fuel efficent vehicles with charging infrastructure to support the city’s EVs.  Stephanie, who is known to ride one of the city’s bicycle’s to meetings downtown, together with Don Francis and Tim Echols, saw the huge need for electric vehicle charging at the airport and in partnering with the Airport Sustainability team, initiated the dialogue with Mayor Reed suggesting that maybe 50 stations were needed. His Honor quickly increased that number 6-fold. Stephanie is truly walking the talk and recently purchased a pre-owned 2014 Tesla Model S 60 following a test drive of a new Tesla at the City of Atlanta’s first Electric Vehicle Ride & Drive event. True to her values, Stephanie purchased a ‘recycled’ electric vehicle! 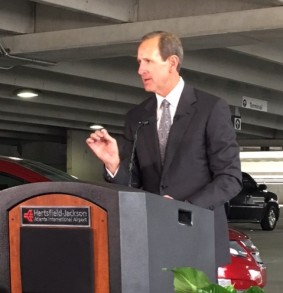 Paul Bowers, Chairman, President and Chief Executive Officer Georgia Power, A Southern Company.  It takes amazing commitment on the part of a public utility to get behind an initiative with candidly, a negligable ROI. With just over 25,000 EV’s, it would have been very easy for Paul Bowers to politely decline support for the EV Community Charging program, which is in the process of rolling out up to 61 recharging islands with both DCFC and Level 2 stations throughout the State of Georgia.  Instead under Mr. Bowers leadership, Georgia Power has embraced and significantly advanced the ability to own an electric vehicle in Georgia as the result of the series of committments that he and his organization have made, including supporting the multi-year charging stations project at Atlanta Airport.

City of Atlanta Mayor Kasim Reed and Hartsfield Jackson Airport General Manager Roosevelt Council Junior.  Hartsfield-Jackson International Airport plays host to 100,000,000 passengers a year, the majority of whom do not live in metro Atlanta. The airport is in the midst of a $6 Billion modernization program which includes the demolition and reconstruction of the North and South terminal parking decks targeting 2018-2020 timeframe.  Mayor Reed is committed to making Hartsfield Jackson International Airport the “Greenest Airport in the World.” Mayor Reed Puts Atlanta on the Global Climate Stage 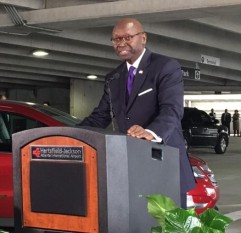 When asked about the timing for electric vehicle charging at the airport, Mr. Council’s predecessor said 2-3 years aligned with the new parking decks.When Mayor Reed gave the word just several months ago (summer 2016), Mr. Council got to work and found a way, partnering with Polly Sattler, Senior Sustainability Planner, to make electric vehicle charging happen throughout the airport in January 2017!   Thank you Mayor Reed for lighting the fire and thank you Mr. Council for carrying the torch!

The January 12, 2017 media event was held in the International Terminal Short Term parking deck where 75 people gathered for the announcement, several of whom were delighted to plug and and charge up during the event many had been waiting for a very long time! 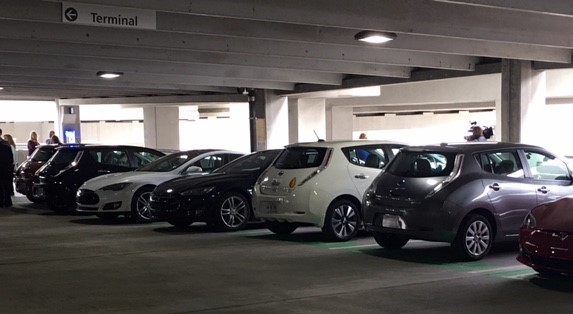 As the leaves began to turn, three very significant events have taken place which bode well for the advancement of electric vehicles and supporting recharging infrastructure in the State of Georgia.

Hartsfield-Jackson International Airport  City of Atlanta Mayor Kaseem Reed has committed to the installation of 300 electric vehicle charging parking spots by the end of 2017. Sources indicate the charging infrastructure will be a mix of Level 1 charging stations, L1 plug-in outlets (owners can plug in their charging cordsets), Level 2 stations and even a few DCFC stations. Regardless, this is a HUGE step forward as the most notable gap for EV charging in metro Atlanta is the airport.  The first 100 charging spots will be on-line by the end of 2016 with the remaining 200 coming on stream over the course of 2017.

During the last meeting at the State Capitol, electric vehicle testimony was provided by Nissan North America, the City of Atlanta (Director of Sustainability Stephanie Stuckey Benfield) and CleanCitiesGeorgia. The latter was provided by Executive Director Don Francis, whom everyone knows is the “Godfather of EV Charging” in Georgia.

Don made a fact based presentation to the Joint Committee seeking to demonstrate:

At the end of this final session, Mr. Francis put up the “Ask” slide and boldly put forth three recommendations which the Joint Study Committee positively received:

The committee thanked those providing testimony on behalf of Electric Vehicles with the prevailing sentiment expressed by Senator Butch Miller: “Something needs to be done but it is a question of balance. We need to find the right balance.”

Electric Vehicles and the Southeast Grid – Newly re-elected Public Service Commissioner Tim Echols and Union of Concerned Scientists‘ Peter O’Connor convened a two-day ‘think tank’ session to discuss the current and future state of electric vehicles, and charging infrastructure, to hear case studies from regional public utilities, and take a glimpse into the future of charging infrastructure.  Workplace charging was tackled by one panel and Residential charging by another. Four public utilities (Duke Energy, Georgia Power, Florida Power and Light, Jacksonville Energy Association) shared the outcomes of their initiatives to support PHEVs and recharging infrastructure. Ally Kelly from The Ray foundation shared the plans to test bed roadway embedded EV recharging on the 18 mile stretch of Interstate 85 between Georgia and the Alabama State line named in honor of the late Raymond C. Anderson, the visionary Chairman of Interface who led the carpet industry into the recycled fibers technology.   Audi’s EV Architect (coolest job title at the conference) Wayne Kallen said that the first full Battery Electric Vehicle from Audi is coming in late 2018!

So if one were to believe that all of the PHEV development work was taking place in California, this conference would surely have demonstrated that incredible advances are being made in the Southeast and in fact Jeff Kessler representing CARB (California Air Resources Board) said as much during his panel remarks.

During the post 2015 Georgia General Assembly era, the electric vehicle constituents in Georgia have been very busy advancing infrastructure (4,500 Public Level 2 charging stations and 375 Fast Charge plugs), and building the case for the Legislature to restore the State to a leadership position in the advancement of Electric Vehicles in Georgia.

Stay tuned as we watch how the next major development – the almost $60 million VW settlement Fund [if the State accepts it], is to be administered in Georgia. You can be sure that more charging stations (and even Superchargers) are on their way as the 2017 Chevrolet BOLT, the 2018 Tesla Model 3, all new Nissan LEAF and that all-electric Audi extend the reach the electric vehicles throughout the State of Georgia and beyond.