This past August 2017 marked the 5th Anniversary of my transition from “gas to electric” driving, logging about 70,000 miles in either all electric (Nissan LEAF, Tesla Model S) or Plug-In Hybrid Electric (Chevrolet VOLT) vehicles.  In thinking about my life experience as an EV driver, I wanted to share my perspective as the US EV market cracks the 1% mark and the 99% Reality of why I believe that EVs can be the ‘go to’ vehicle for the vast majority of driving circumstances.  [photo: 2013 VOLT on delivery day 8-16-2012]. END_OF_DOCUMENT_TOKEN_TO_BE_REPLACED

Tesla delivered 34,455 Model S and Model X through September 30th following a very aggressive (for Tesla) sales push which included Model S and X ‘inventory vehicles’ – produced without a buyer and the ramp up of Model X production. Tesla reportedly converted a number of Model 3 buyers to Model S with its newly re-priced $66,000 base price. I visited Tesla stores in Atlanta and Cleveland where the store”cupboards” were bare and exhausted Product Specialists had delivered every vehicle they could get their hands on before September 30th. Tesla began to make deliveries of its 0-60 in 2.5 seconds P100D with its 315 mile driving range as well.

Chevrolet VOLT –  sales for the second 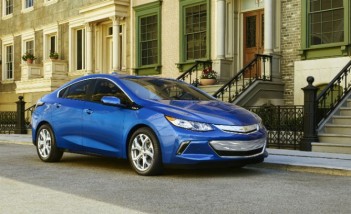 Federal Incentives (up to $7,500) are still plentiful and many states also have additional incentives on top of Federal continuing to support EV sales.  US gasoline prices are creeping up but still very low so not likely impacting the sales growth of EVs.

The next chapter:  2017 Chevrolet BOLT- officially rated by the US EPA at 238 miles of all electric driving range and a base price of $37,495.00 before Federal Incentives.  The long-range, mass market EV may be finally here.  That is until the Tesla Model 3 arrives in late 2017.

2016 is turning into a boom year for plug in electric vehicles!  According to InsideEV’s monthly sales scorecard, electrified vehicle sales are up +19% (+10,455 units) vs. sales through mid-2015 reaching almost 65,000 in sales.  The month of June recorded the highest sales of any month on record breaking 15,000 in sales. InsideEVs Monthly Plug-In Sales Scorecard

Behind the EV resurgence are four factors:

2). VOLT.  The all  new 2017 Chevrolet VOLT is outselling it’s Gen 1 model by 73% with sales just under 10,000 vehicles through mid-year.  Plug-In hybrid buyers know that the VOLT is their best option for daily electric commutes and the range to go the distance (400 miles).  Chevrolet dealers might be getting better at selling the new VOLT; or at least not ‘unselling’it to well educated PHEV buyers.

3). Ford. Ford’s Energi models (C-Max and Fusion) along with the Gen 1 Ford Focus Electric managed to grow unit sales +26%. Ford, through CEO Mark Fields, has committed to invest $4.5 Billion to electrify its product line and offer at least 13 electric models in the near future.  Watch the Blue Oval.

4). New EV offerings in total helped support Plug In growth. BMW X5 Drive40e, Audi A3 E-tron, Volvo XC90, VW eGolf and Hyundai Sonata plug in all have added just under 9,000 vehicles through mid-2016. Most of these models did not exist in early 2015.

What can we conclude from 2016 so far:  new product with longer range is driving market growth and the impact of ‘cheap’ gasoline appears to be part of the history of 2015 Plug In EV sales. Growing charging infrastructure is building confidence in EVs and is slowly chipping away at ‘range anxiety disease’. Major public utilities commitments to building out EV charging infrastructure, especially in California and in the Pacific Northwest is a harbinger of what can be expected across the US: public/private enterprise to support EV charging station build out.

Tesla inventories are reportedly a tad high and the Detroit and Asian Automakers always run ‘end of model year’ clearance sales. Now might just be your time to get into an EV metro Atlantans!

WOW!  Big news from Mayor Kasim Reed’s office about the City of Atlanta moving to Electric Vehicles in its Fleet Program – 50 EV’s in the City’s Fleet by the end of 2015 in partnership with Vision Fleet:

ATLANTA – The City of Atlanta announced today it will deploy one of the largest municipal fleets of electric vehicles in the United States by the end of 2015 under legislation approved this week by the Atlanta City Council. The measure is part of Mayor Kasim Reed’s agenda to ensure that Atlanta is one of the nation’s leading cities for sustainability, and will reduce the city’s dependence on fossil fuels while saving taxpayers thousands of dollars per year.

The new fleet deployment complements the existing efforts of the Mayor’s Office of Sustainability to support electric vehicles such as the recent installation of the first public charging station on Mitchell Street near Atlanta City Hall. The charging station is free and open to the public.

“Replacing our current cars with clean-fueled vehicles, powered by cutting-edge technology, is a historic step for the City of Atlanta,” said Mayor Reed. “The program is yet another example of how we are fully invested in making Atlanta a healthier and more prosperous city.”

Spearheaded by the Mayor’s Office of Sustainability, the new vehicle fleet program is aligned with the City’s Power to Change Plan which seeks to reduce vehicle emissions by 20 percent by the year 2020.

“This is the start of a long-term program to develop policies and programs that will encourage employees, residents and businesses to consider using electric vehicles,” said Stephanie Stuckey Benfield, Director of the Mayor’s Office of Sustainability. “We are grateful to our partners who helped with the passage of this program, including the Southern Alliance for Clean Energy, Clean Cities Georgia, NRG eVgo and Georgia Power’s Electric Transportation Team.”

In partnership with Vision Fleet a plug-in vehicle fleet company, the City of Atlanta developed an innovative financing structure that bundles together all the expenses of purchasing, fueling and maintaining the electric vehicles into a guaranteed rate that is a lower cost than conventional vehicles. Additionally, Vision Fleet will utilize its comprehensive suite of technology, data analytics, and provide operational support designed specifically for reducing the cost of ownership of alternative fuel vehicles.

The City of Atlanta fleet vehicles will include 100 percent electric models, such as the Nissan LEAF, as well as plug-in hybrid models like the Chevrolet Volt and the Ford Fusion Energi. Cars will be distributed throughout the city’s fleet based on the needs of each department.

“This project will have enormous impacts on fuel consumption and fleet service costs,” said Vision Fleet CEO Michael Brylawski. “For example, each of the 50 electric vehicles deployed will save at least 550-600 gallons of gas annually. In addition, fuel costs for the new electric vehicles will be about one-third of the old gas vehicles costs, and maintenance will be reduced by approximately 40 percent.”

I want to thank all of my faithful blog readers for your support over the past year since Atlanta Electric Vehicle Development Coalition was launched!  The blog has reached readers in over 80 countries with almost 14,000 views!

It has been very exciting to see just how much Atlanta has embraced electric vehicles (projection of 25,000 in metro Atlanta by year-end 2015) and to see the incredible build out of EV charging station infrastructure since I put my first Chevrolet VOLT on the road in August 2012.  Now it really is possible to own an EV in metro Atlanta and find public charging almost anywhere!

I am delighted to introduce to my readers a new company: Georgia EVentures, LLC.  My mission is very simple: enable Georgians to get behind the wheel of two of the best examples of range anxiety free electric vehicle driving and to drive these vehicles they way they drive their fossil fuel powered vehicles:  in their neighborhoods, to their offices and shopping areas and for day trips to destinations they enjoy.

Georgia EVentures has partnered with RelayRides to offer these vehicles to you in an easy to rent manner.

In partnership with StudioFindit (StudioFindit 2015 Tesla Model S60) the Tesla is available for film production. Who knows, “BlueBeauty” may be seen in an upcoming feature film or cable or network TV series!

Thanks for your faithful readership!  I look forward to hearing about your experience with these amazing electric vehicles and Georgia EVentures!

If I were a professional golfer, I would have been told that my prediction was a ‘gimme’ based on how close I came to being accurate:

With the battery re-engineered to provide more storage with fewer battery cells (192 vs 288) this was expected.

But look at the 2015 Chevrolet Cruze and you get an idea of what the 2016 VOLT is going to look like: compact.

Frankly, it looks like a Honda Civic not a cutting edge EV – but that’s what GM’s research told the designers to do.

but this vehicle will not be a game changer; it’s likely the vehicle that should have launched in 2011:  $29,995 base price, Missed this one – looks like it’s going to stay at $34,995 before Federal Tax Credit.

Useable gauges, (yup). But the complaints were so high on VOLT 1.0 this had to be done.  But Chevrolet fell back on its current GM cluster gauges so the WOW factor is now gone. Somewhat cool iPad/app based interface.

Middle seat is just a back cushion. Third passenger needs to ‘straddle’ the battery pack.

I hope there are more substantial surprises when the VOLT 2.0 is unveiled at the NAIAS the week of January 12, 2015: like using more than 60% of the 17.1kWh battery!

This did not happen.  Larger battery but no change in useable capacity. Most disappointing:  on board charger modestly increased from 3.3 to 3.6 kW.  Gonna still be slow going charging VOLT 2.0.

Tomorrow the new 2016 VOLT 2.0 will be unveiled at the North American International Auto Show.  And it looks like we’ll hear about the 2017 200 mile Lithium Ion BOLT 5 door hatchback as well!

Check back in to see how close I came to predicting the new VOLT and to learn more about the BOLT!

By design, Hybrids (including plug-in Hybrids or PHEVs) emit lower levels of carbon dioxide than traditional gasoline powered cars. But how significant is the CO2 reduction? Very significant. Read on!

Below is a comparison of the annual CO2 emissions, measured in metric tons, of a range of gasoline, hybrid and plug in hybrid vehicles. The significant reduction in CO2 as the result of increasing electric power is staggering.  The Honda Accord PHEV emits 57% less CO2 than the gasoline powered model (2.0 vs. 4.6 metric tons/year*).  Over the typical 10 year service life of the Honda Accord, that equates to a reduction of 26 metric tons of CO2 by driving the PHEV model in place of the gasoline powered model.  Similarly the #2 selling electric vehicle, the Ford Fusion Energi, reduces CO2 by 60% from 4.8 to 1.9 metric tons of CO2.

Even the Porsche Panamera Hybrid reduces CO2 by 52%, or -3.3 metric tons/year vs. the gasoline powered model.

So which vehicle has the lowest CO2 emissions?  The Chevrolet VOLT at just 1.2 metric tons/year owing to its extended electric range (EPA rated at 38 miles).